Updates on Shahrir Samad: over the wesak day.

The Limelight of Shahrir over the Wesak Day:

Fuel subsidy revamp on the cards

The rising costs of fuel have put more pressure on the Government to come up with a fair and efficient solution to ease the burden of the rakyat and relieve the strain on its coffers.

ALL eyes are on the Government's struggle to find a more equitable and efficient solution to the prickly issue of fuel subsidies.

This year's fuel subsidy is expected to hit a whopping RM45bil – even higher than the annual allocation of RM40bil under the Ninth Malaysia Plan – based on oil prices of between US$100 and US$120 a barrel. 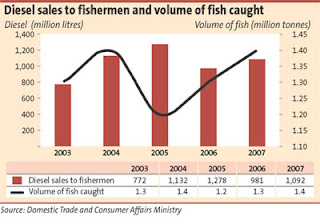 Of the total, subsidies for petrol, diesel and natural gas will be RM18bil, tax foregone RM7bil and the national oil company's gas subsidy RM20mil.

Oil price is currently trading above US$120 per barrel. Goldman Sachs recently predicted that oil prices could hit US$200 a barrel within two years.

The Government is said to be looking at two-tier pricing for petrol and diesel, with subsidies going to deserving consumers especially those in the lower-income groups and priority industries/sectors such as public transportation and agriculture/fishery.

Domestic Trade and Consumer Affairs Minister Datuk Shahrir Samad has been pretty vocal on the issue as evidenced by the many news reports on the various proposals that are being considered.

These include replacing the current grades of petroleum with two new grades, RON 95 and RON 99, whereby the latter grade targeted at high-end vehicles would not be subsidised as much as the former, the use of the MyKad and even the introduction of a new card for more efficient subsidy allocation in fuel purchase.

Posted by Berita dari gunung at 11:54 AM