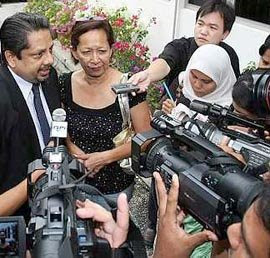 FIELDING QUESTIONS: Chandra responding to questions from reporters on his client's bail application in Petaling Jaya yesterday. Beside him is Marina, who was also relieved that Raja Petra, 58, was fine despite declining prison food for a day. ... the star online

His wife, Marina Lee Abdullah, posted bail of RM5,000 on Thursday after her husband agreed to it.

Raja Petra had declined to meet visitors, including his wife, since Tuesday, when he was taken to Sungai Buloh prison after refusing to post bail.

Marina finally managed to persuade her husband on Thursday.

Speaking to reporters after he was released, Raja Petra said he had declined to meet anyone as there was not much to be done except await his trial, which is scheduled for October.

However, prison authorities urged him to seek release due to concerns over his personal safety in prison, he claimed.

Raja Petra also said he had not eaten anything since he was taken to prison on Tuesday.