Mahathir will cooperate with Malaysian prosecutor

Mahathir will cooperate with Malaysian prosecutor

KUALA LUMPUR (Reuters) - Malaysia's former prime minister Mahathir Mohamad said on Saturday he was willing to cooperate with the justice system in an inquiry over possible offences over the appointment of judges while he was in power.

The government on Friday ordered its chief prosecutor to investigate six people, including Mahathir and two retired top judges, for possible criminal offences relating to the 2001 judicial scandal. 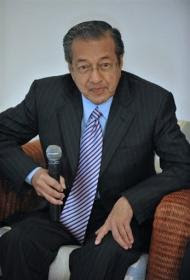 "I welcomed any move to investigate me but don't give up half way and claim that there is no case against me," Mahathir, 82, told a gathering in the southern state of Johor.

"I want to go all the way to the court," said Mahathir, who retired in 2003 after 22 years in power and turned a bitter critic of Prime Minister Abdullah Ahmad Badawi, his handpicked successor.

"Let me expose many other things in court. If I lose, I will accept whatever punishment," he added.

An inquiry set up to investigate the scandal found on Friday that a prominent tycoon and a former government minister were involved in a covert campaign to influence judicial appointments seven years ago.

Asked to comment on the report, Abdullah said: "The report recommends several actions that must be taken to further improve the judicial system in our country and other actions that we must also consider.

Posted by Berita dari gunung at 11:39 AM