Anwar did not just become an overnight politician, the former has a track record of service and experience in government previously, said Kelantan opposition leader Md Alwi Che Ahmad.

Besides being a fiery orator, Kelantan opposition leader Md Alwi Che Ahmad says that Anwar Ibrahim does not have an impressive track record.

KOTA BARU: Voters should evaluate the track record of Anwar Ibrahim before they support the notion of him becoming the next prime minister.
Speaking at the launching of the state Barisan Nasional supplementary manifesto, Alwi reminded voters that Anwar had served as a minister in the Youth and Sports, Agriculture and Education Ministeries before becoming deputy prime minister and finance minister in the Umno government.
“Ask yourself what did Anwar achieve in those ministries and what were the impact of his policies on the country, particularly on the economic part,” he said.
He added that this has nothing to do with his questionable moral values but rather Anwar’s capabilities and abilities as a leader.
Apart from his oratory skills, Alwi questionedchie what were Anwar’s other achievements.
He stressed that finding fault with others is the easiest part of politics but showing the ability to lead and having the right formula to govern a multi-ethnic nation like Malaysia, is another.
“Umno knows too well who this soul [Anwar] is. He has many deficits, but he also knows how to mislead. We, in Umno, were his first victims,” he said.
Alwi claimed that Anwar is not confident of “misleading the people alone” and thus hides behind PAS and DAP.
“Anwar is hiding behind the likes of Karpal Singh, Nik Abdul Aziz Nik Mat and Lim Kit Siang just to up the odds of him becoming prime minister,” he said.
Later, state BN chairman Mustapa Mohamed declared that the manifesto touches on wide ranging needs of the state.
It treats both Muslims and non-Muslims alike as the masterplan is to help all progress through a balanced form of development.
The people in Kelantan have suffered long enough under the politics of hatred and polarising with the use of religion as its gambit, Mustapa said, adding that BN promises that if it recaptures Kelantan, it will restore unity in every facet of society here. 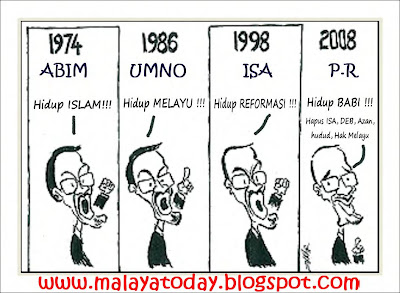 He also said that Islam will be a central facet of the government here except that Umno will act on its teachings by using its values to develop the state instead of just using the religion as mere slogans.

'What has Anwar achieved?'
Free Malaysia Today ‎- 2 days ago
Besides being a fiery orator, Kelantan opposition leader Md Alwi Che Ahmad says that Anwar Ibrahim does not have an impressive track record ..